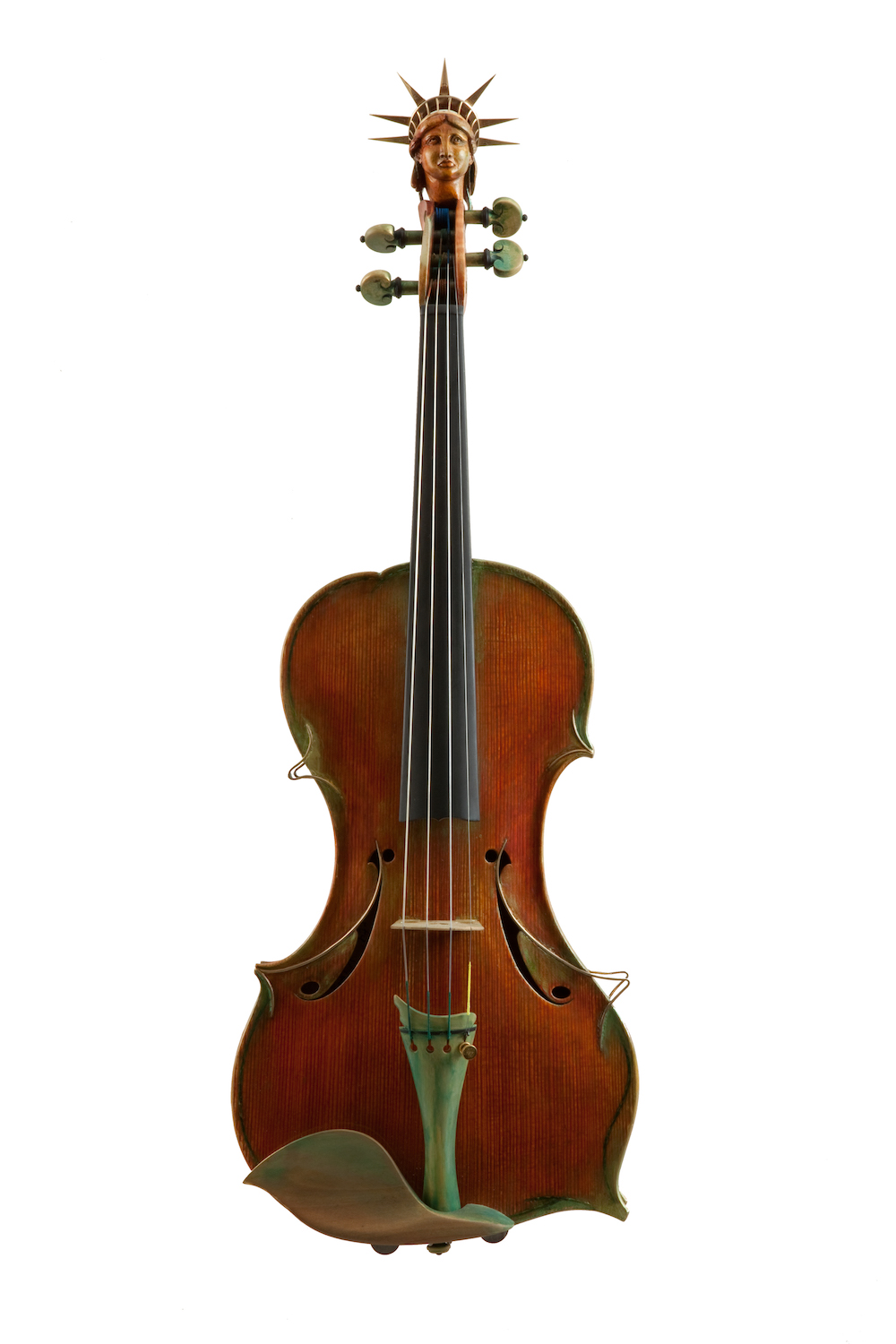 Lady Liberty Violin was designed and built in 2008. Is a tribute to the United States of America, and is dedicated to all immigrants in the US. It is a modern violin inspired by the “Statue of Liberty”, created specially with New York in mind.  “This project is especially important for me, as a creator of the violin and as a Polish artist and violin-maker currently living in New York. The violin was inspired by my favorite statue, the Statue of Liberty the artwork of Frédéric Auguste Bartholdi. I believe it to be the most famous monument and portrayal of freedom in the world. The depiction of this worldwide symbol of American diversity still represents hope for the future. This violin was made in tribute to the United States of America, especially in honor of the dawning of a new era, welcomed by the inauguration of President Barack Obama. Lady Liberty Violin represents symbols of the renewal of our hopes and freedoms.

I hope that my Lady Liberty Violin, through its motto and its musical and artistic expression, can narrate this history to all Americans. This is a history whose message is the still current slogan: "Liberty, Tolerance, Hope, Peace, Opportunity"- expressing the conviction that these ideas are still important for each inhabitant of the US.

The violin is traditionally constructed, retaining the proper proportion and ergonomic of performance like a classical violin yet incorporates the new and unique form of Art Deco fashion, an innovative combination of wood with precious metal – 14carat gold. The head of the violin is a miniature reflection of the sculpted head of the New York "Liberty" statue accented with a golden crown and her resonant body displays golden inlay elements. The violin posses a new look in its sculpture and colors. The sound of violin is dark and powerful with value a concert instrument.

For each resident of the US Statue of Liberty is the most important symbol of the freedom of people and ideas, life, knowledge, justice and liberation for slavery. It became, as it were, an icon of New York and the United States. Currently it is probably the most famous monument in the world, also called "Lady Liberty". For over 130 years now she has stood on Liberty Island, where she still welcomes people traveling to the "New World". This statue is a vehicle of important symbols and ideas, already known in ancient Europe. For example, the torch which Liberty holds aloft in her right hand is a symbol of life and knowledge, of the eternal flame, which not even the wind can extinguish, and of the messenger between heaven and earth. The crown on the head of Liberty, with its seven spikes, represents the continents. The torn chains at her feet are liberation from oppression, slavery and poverty. In her left hand, symbolizing justice, is a tablet with the date that the USA obtained independence: July IV MDCCLXXVI (July 4, 1776). The Statue of Liberty was given to America by the French nation in 1876, on the 100-years anniversary of the signing of the Declaration of Independence in the US. With time, it has become one of the most important symbols of America, next to the American flag, the eagle, or the Liberty Bell. Until the 16th century it was actually the "Indian Queen".

The whole project and idea was initially supported by The Ministry of Culture and National Heritage in Poland.

Back to New Creation

If you are seeking a fine violin, viola, cello, or bow, please call and visit me to see what I have to offer. Of course, my collection is always changing. I will always be very happy to describe my offerings. You will find the best services and honest pricing.